At approximatley 3:30 pm Kentcenter started taking several calls for a fire on N Little Creek Rd, north of town.  Some of the calls from motorist passing could only report a large fire in the field. Others reported the possibility of a combine or other farm equipment on fire.  Alll the while the duty crew with 54-5 was assisting Sta 46/Dover with an well involved car fire on Scarbrough Rd between Route 1 and Route 13.  The above picture was taken by an IT specialist working at the firehouse as the station was being alerted.  Chief Bundek arrived and advised Kentcenter that approximately five acres of a barley field was on fire heading to the southeast, driven by the wind.  He requested three additional brush trucks, which brought additional crews from Dover, Magnolia and Cheswold.  The video taken by Firefighter A Strouse, from the rear parking lot of the firehouse shows how quickly the wind driven fire moved and potentially threatened the cell tower, marine radar, our fuel storage tanks and the nine residence along Bell Street.  A total of 75 acres were comsumed.  Crews from Leipsic, Dover, Magnolia and Cheswold battled the fire and Bowers/Sta 40 covered the district with Tanker 40.

Barley field fire behind the firehouse 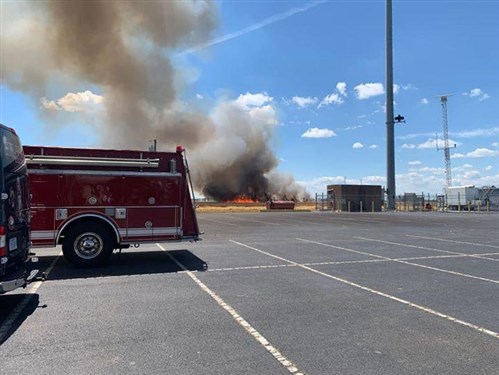 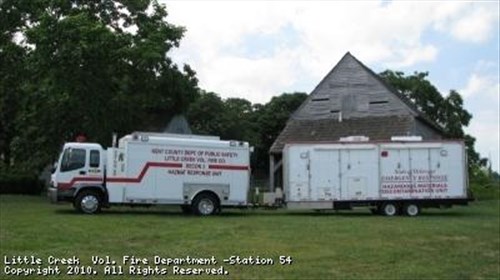